Structure Deck - Gates of the Underworld 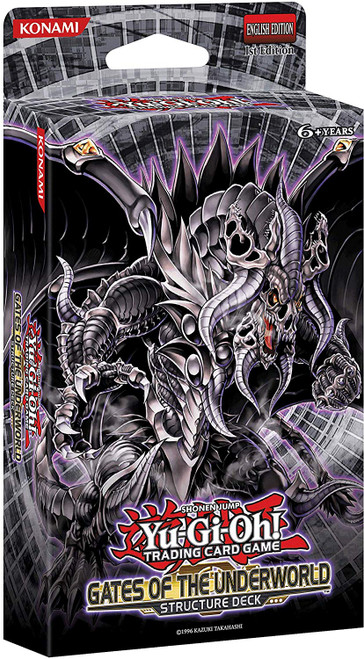 Structure Deck - Gates of the Underworld

Duelists of the mortal world – beware!

I am Grapha, Dragon Lord of Dark World. And it is my honor to serve as supreme commander of the forces of Dark World, on the eve of our return to your earth.

We – The Lords of Dark World – have always stood on the periphery of dueling. Duelists have overlooked our powers to destroy the opponent’s monsters, spells, traps, and even the cards in their hand. We have brought devastating victories to our allies, yet we have never been seen in the winner’s circle.

You wish for us to show our full powers? So be it! The Gates of the Underworld have opened. And let all who oppose us flee in terror as our full might comes forth!

With our most powerful forces finally assembled, we will crush any who stand in our way. And when Photon Shockwave arrives in its full glory this November, we will receive further reinforcements, including Latinum, Exarch of Dark World, and one of our most secret weapons: the Dark Smog.

After six years of waiting, and plotting, and planning, we are back. You WILL ally yourself with us. Or you will be swept aside.

Abandon all hope, ye who would stand against us!

Gates of the Underworld Structure Deck is a ready-to-play 40 card Deck. You can play with it as-is, or use these cards to create and customize your own Deck. It includes every Dark World monster released to date, so it’s all you’ll need to build a Dark World Deck of your very own!